Facebook, Twitter and Google executives have been invited to testify in Washington on Wednesday about foreign influence campaigns and disinformation online ahead of the midterm elections in November.

The problem has been far reaching. Over the summer, Facebook announced the discovery of hundreds of fake pages and user accounts on its site. Some pages appeared to specifically target Americans with divisive messages, using the same tactics that Russian operatives did to influence voters during the 2016 presidential campaigns.

The latest influence campaigns also imitated posts by legitimate pages and groups on Facebook that advocate political beliefs, making it difficult to tell what was a genuine post and what was not. Let’s compare some to see if you can tell the difference. Spoiler: It isn’t easy.

One of these posts was from a genuine Facebook page thatsupports feminism, and the other was part of an influencecampaign. Can you guess which post is from a fake page? 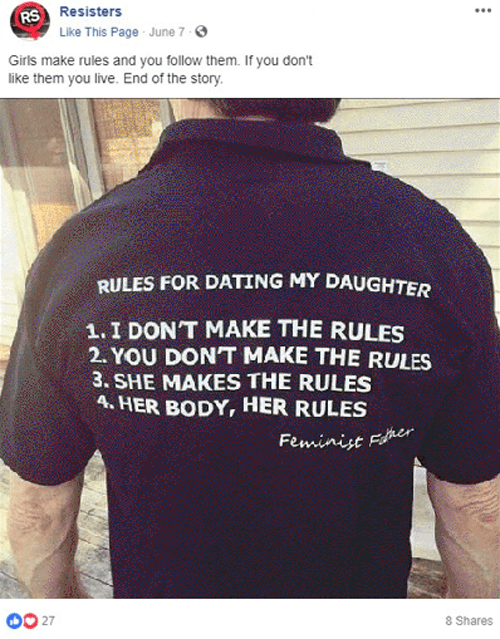 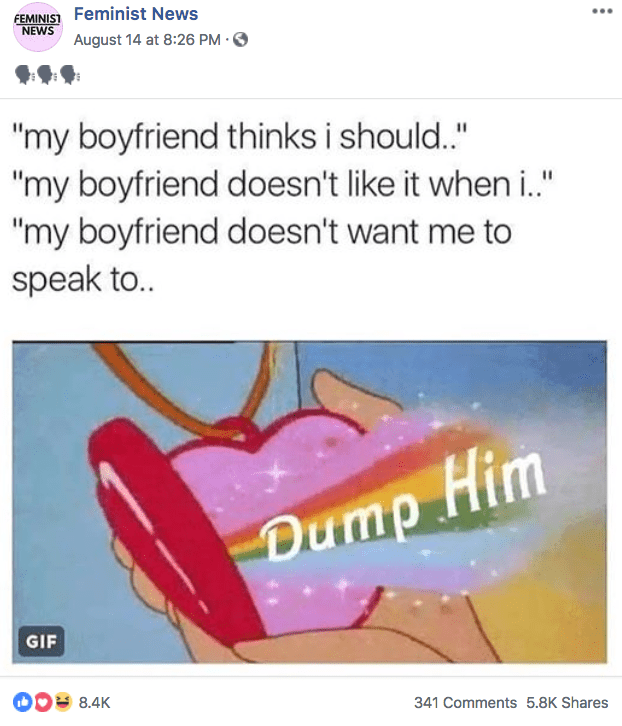 “Resisters” was a fake account that Facebook removed in July. “Feminist News” is a real Facebook page, as far as we can tell. (We asked Facebook to confirm the examples of real accounts used here are in fact authentic, and were told there was no apparent reason to suspect otherwise.)

The Resisters page existed for more than a year and described itself as “online and offline feminist activism against fascism,” according to Facebook and researchers at the Atlantic Council’s Digital Forensic Research Lab, which analyzes disinformation online and works with Facebook.

You may have guessed the post was from a fake page if you looked closely at the language: “Girls make rules and you follow them. If you don’t like it you live. End of the story.”

Broken English is not a sure sign that a post is part of an influence operation. But grammatical errors were a common trait among the Russian ads Facebook disclosed in 2017 — particularly the misuse of “a” and “the,” which don’t exist in the Russian language. 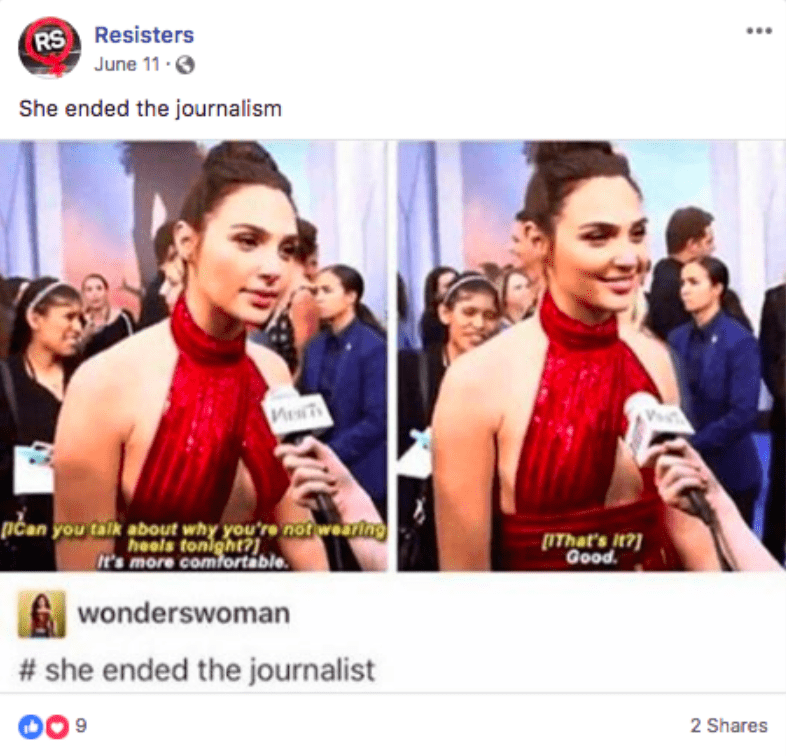 Although Facebook has still not tied this page to Russia, the language used in its posts and several other factors suggest a connection. For one, a Russian account that Facebook removed in 2017 had been set as an administrator of the Resisters page, though “for only seven minutes,” Facebook said. Before being shut down, a Russian account had also shared an event created by the Resisters page with its followers.

And on Twitter, an account with the name “ReSisters” and the handle “@resisteszunion” was identified this year as one created by the Kremlin-backed Internet Research Agency.

The page’s most notable activity was an effort to organize a counterprotest to a conservative rally. It created an Aug. 10 event titled “No Unite the Right 2 — DC” to protest a planned white supremacist rally in Washington. The page coordinated with administrators of other Facebook pages, and persuaded five of them to share the event with their followers. 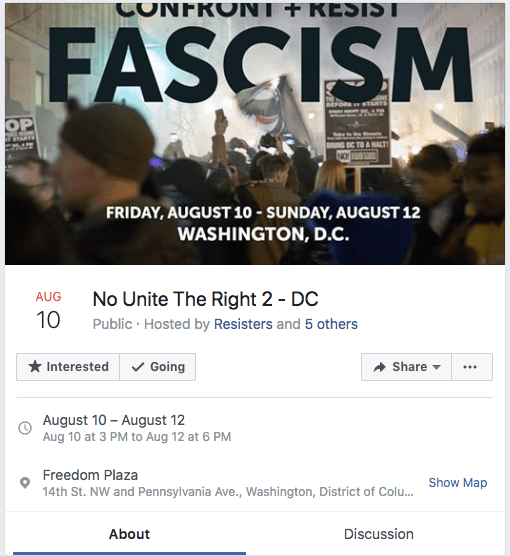 Facebook removed the event page before the rally, and informed 3,200 users who either expressed interest in the counterprotest or said they would attend about the suspicious activity behind it.

Which post about Latin American heritage is from a fake page? 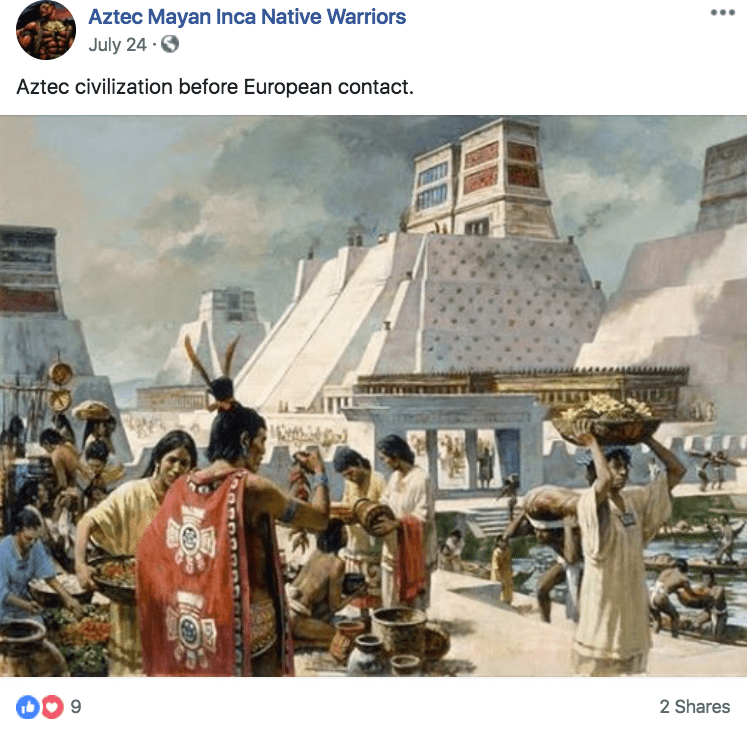 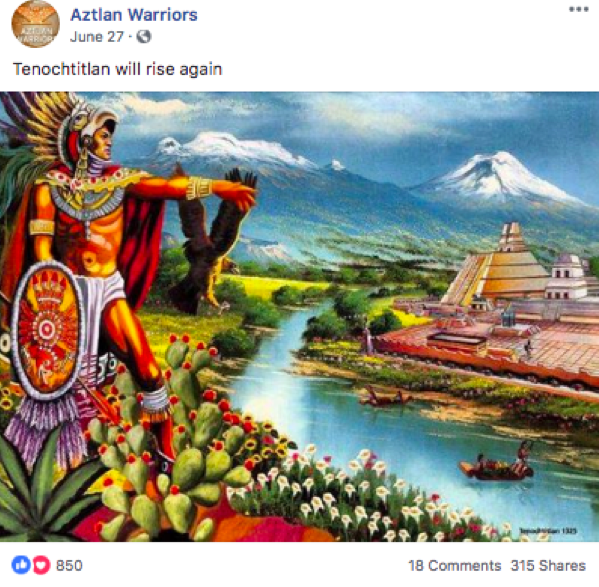 “Aztlan Warriors” was part of an influence operation, and “Aztec Mayan Inca Native Warriors” is a real Facebook page.

The Aztlan Warriors frequently posted divisive images and videos about the ancestry and oppression of Hispanic Americans and Native Americans. It was created on March 20, 2017, just one day before the Resisters page, according to researchers at the Atlantic Council, who took screenshots of the pages before Facebook took them down.

You may have guessed the post was from a fake page if you were familiar with posts from the Russian pages that were discovered last year. One of those pages, called “Brown Power,” included the same kinds of messages and imagery. 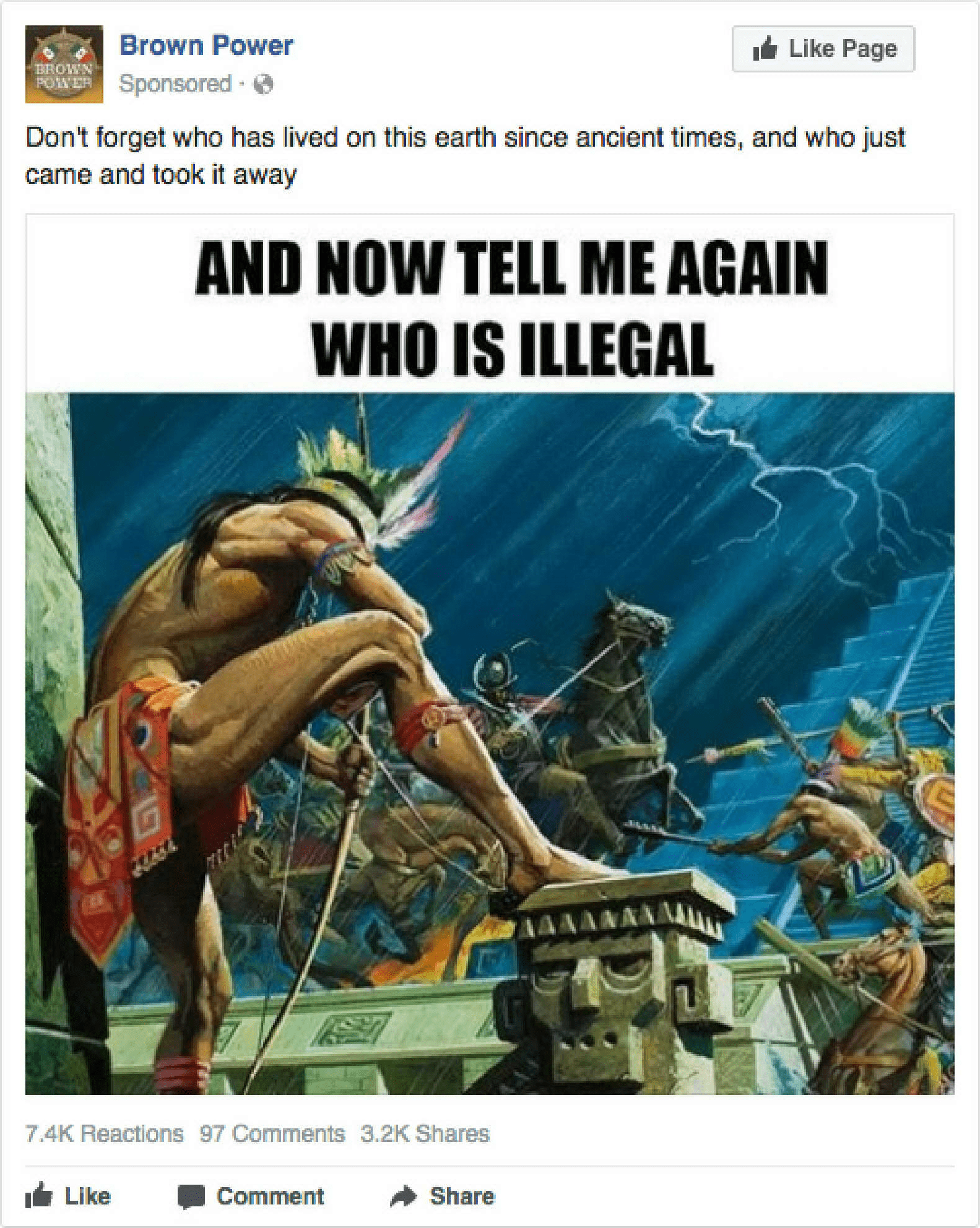 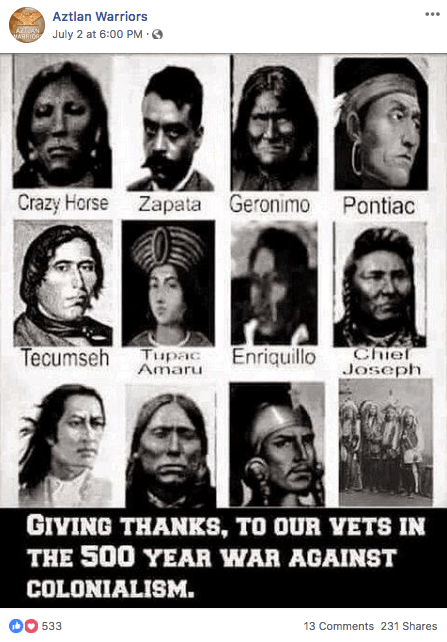 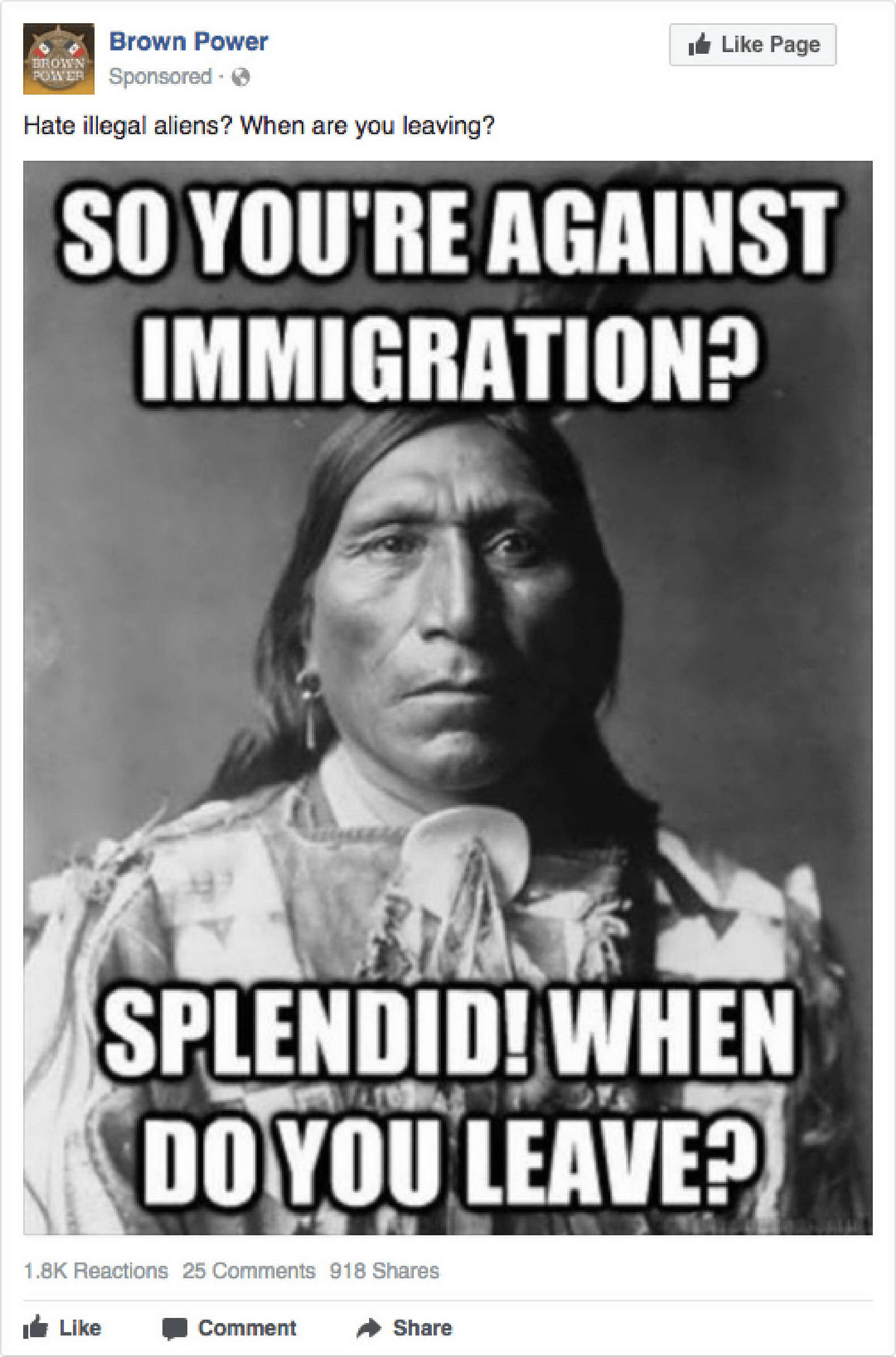 Like the Resisters page, the Aztlan Warriors page also corresponded to the name of a Twitter account, “@warriors_aztlan,” that was recently identified as part of Russia’s influence operation. That account, according to archives, posted tweets with similar sentiments about immigration.

The page’s most notable activity, aside from its posts, was its publishing of videos that often went viral. The page posted content every two hours, and 14 of the videos it uploaded were viewed more than 1.4 million times, according to Jonathan Albright, a researcher at the Tow Center for Digital Journalism at Columbia University, who analyzed the page’s activity after it was taken down.

Which post about self care is from a fake page? 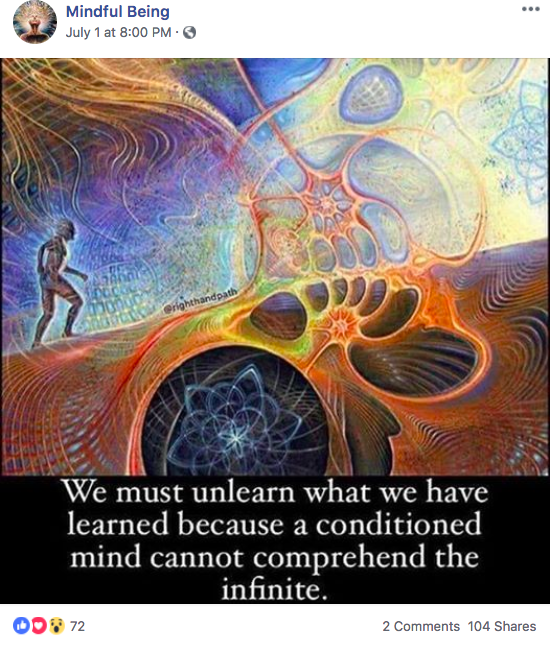 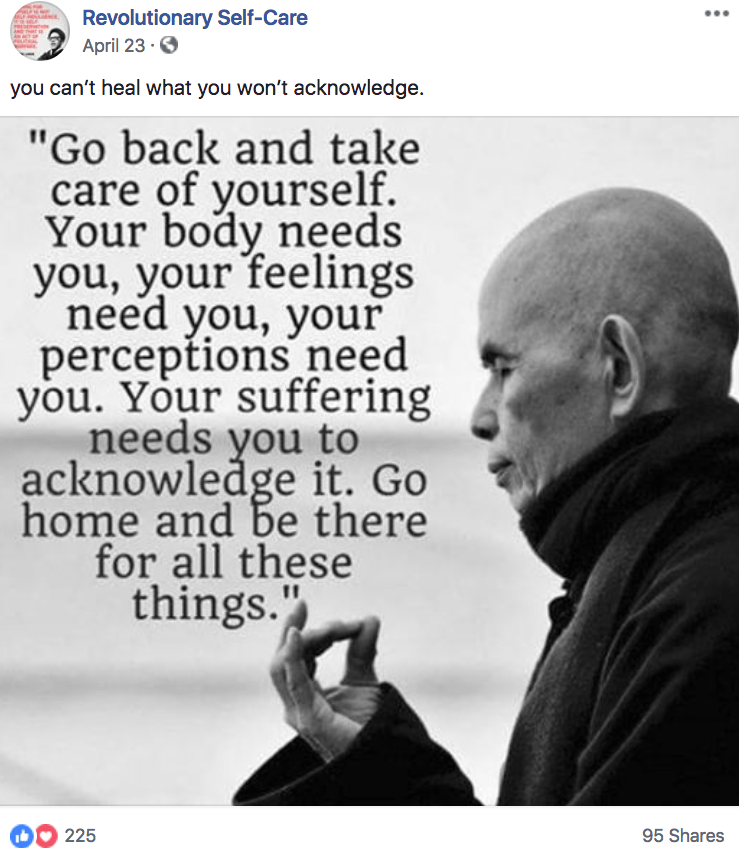 Indeed. “Mindful Being” was part of an influence operation, and “Revolutionary Self-Care” is a real Facebook page.

The Mindful Being page existed for only two months before Facebook removed it. The page mainly focused on innocuous topics like health and well-being, though some of its posts challenged the media and the pharmaceutical industry, suggesting it was laying the groundwork to tread into more controversial content. 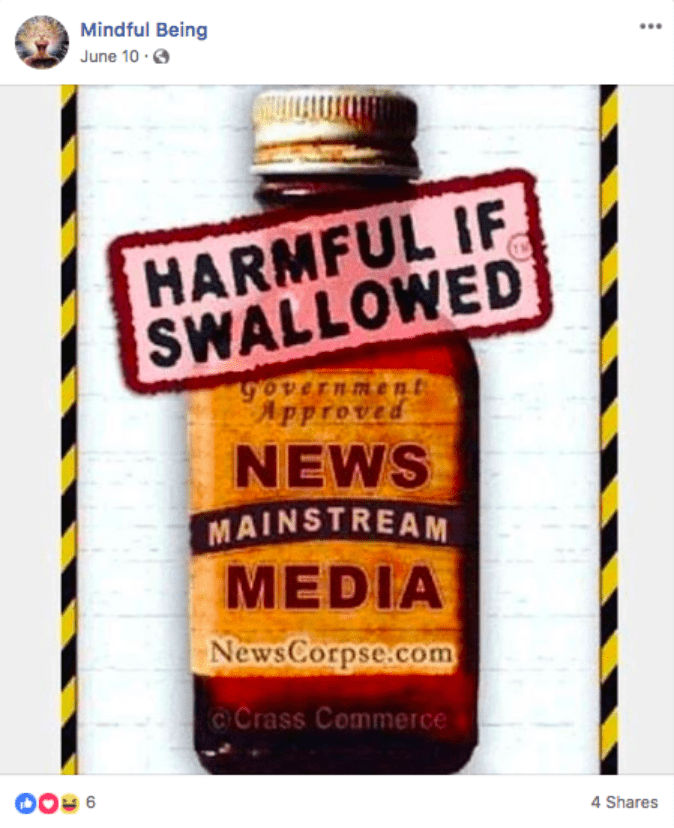 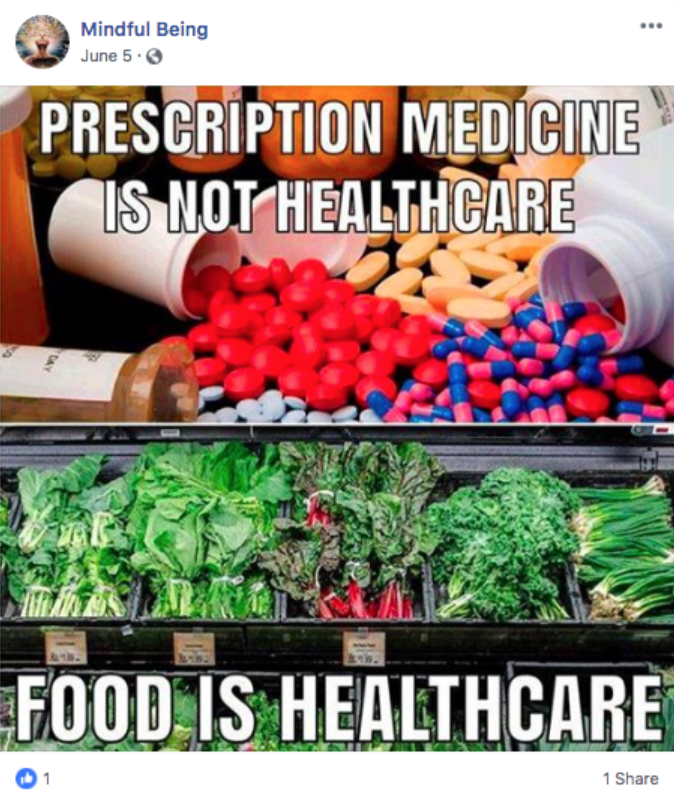 You probably could not have guessed the post was from a fake page because it included a meme and nothing else. Posts on Mindful Being rarely included text written by the posters, and the memes it posted were similar to those found on real pages like Revolutionary Self-Care. Mindful Being also does not closely resemble any of the Russian pages Facebook took down in 2017.

According to information collected by the Atlantic Council before the page was shut down, however, Mindful Being did on at least one occasion employ a tactic common among the Russian pages. The text in the post below was wholesale copied and pasted from an article on the website Gaia.com. 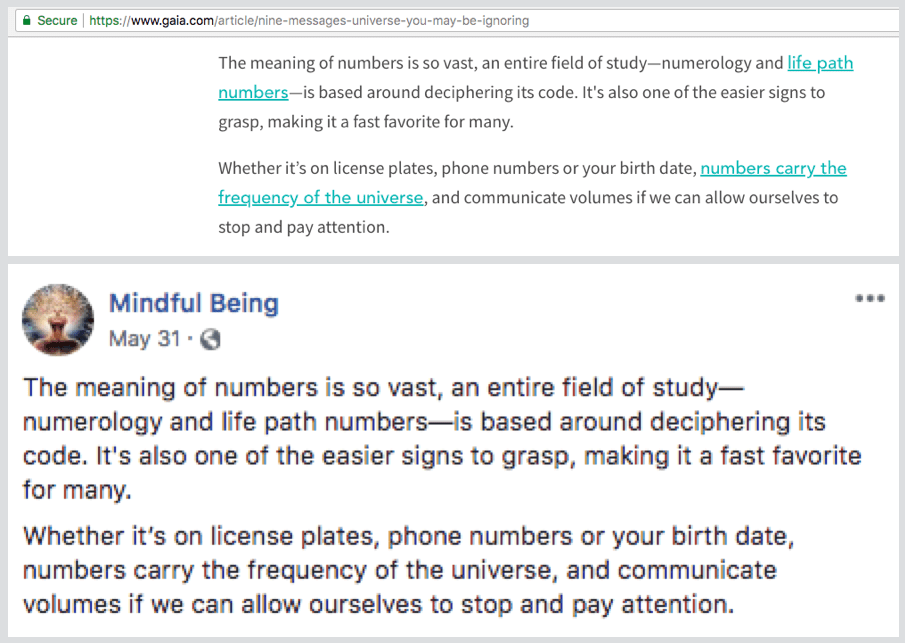 Russian pages frequently plagiarized in this way, possibly to get around the language barrier that gave them away in other posts.

The page’s most notable activity was its lack of political messaging. For the most part, this page was quiet and convincing. Other than the two political posts above, it stuck to noncontroversial content, rarely with any added commentary. That could suggest the page was following a common troll strategy of building a page’s audience with inoffensive content, then veering into the political.

Which post about African-American issues is from a fake page? 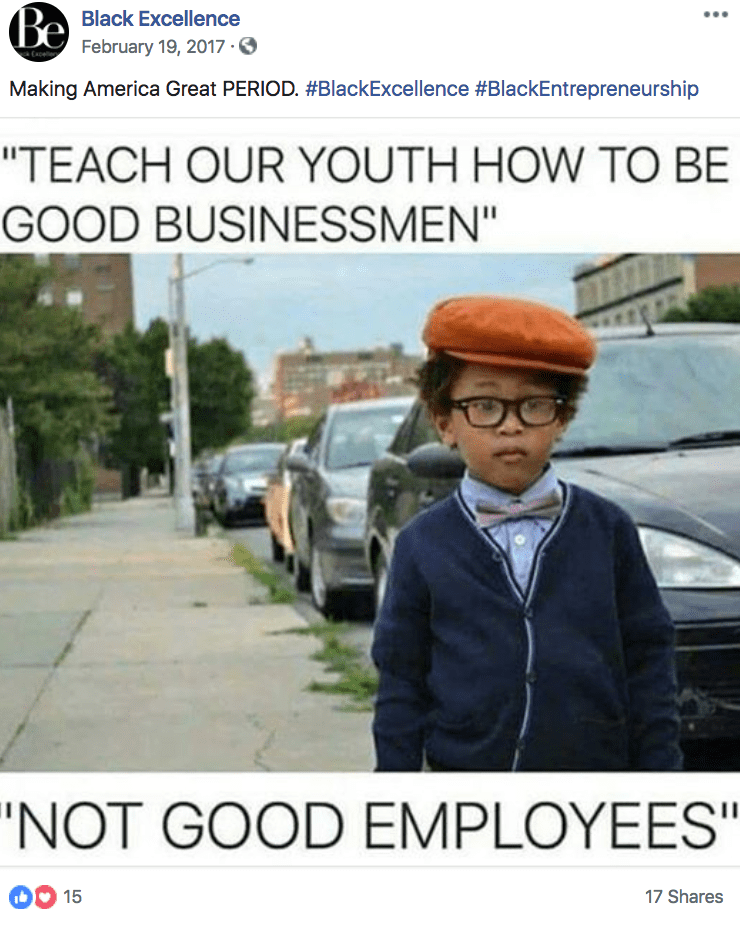 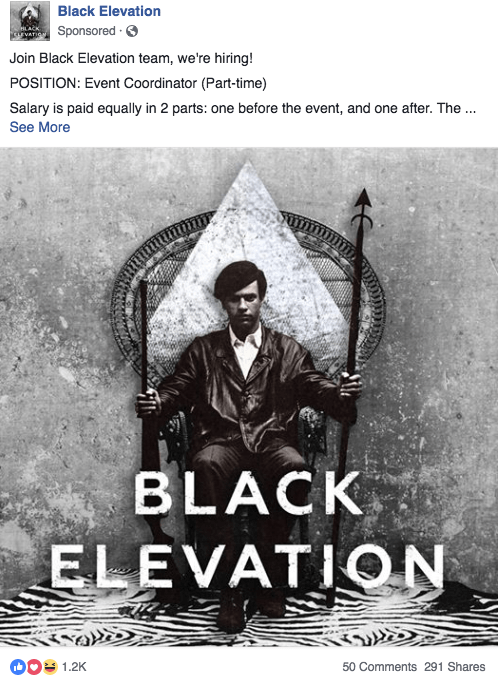 You guessed right. “Black Elevation” was part of an influence operation, and “Black Excellence” is a real Facebook page.

Black Elevation was the largest of the fake pages Facebook shut down at the end of July, with nearly 140,000 followers. The group targeted activists fighting for racial equality in the United States.

You may have guessed the post was from a fake page if you noticed the missing “the.” Like the Resisters post, this one included the small but noticeable error common among native Russian speakers. Black Elevation created some of its own content, and often made spelling and grammar mistakes like this.

Like the Resisters and Aztlan Warriors pages, Black Elevation had a corresponding Twitter account, @black_elevation, that was identified this year as part of a Russian influence operation.

Mimicking groups like Black Lives Matter to sow divisions among Americans is a well-known strategy of Russian influence operations. Hundreds of the Facebook ads bought by Russian trolls, removed from the social network last year and released by Congress in May, were clearly meant to incite racial tension. 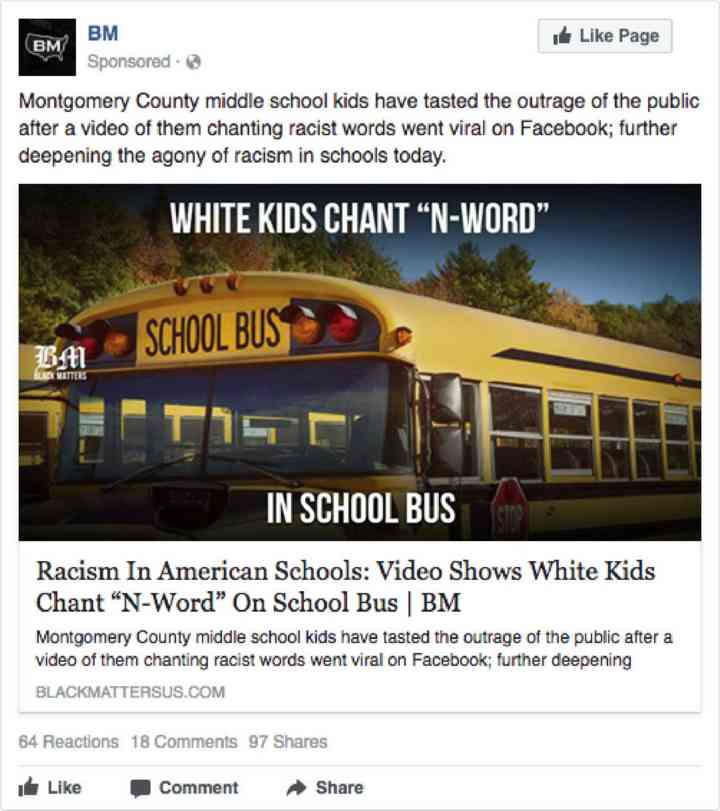 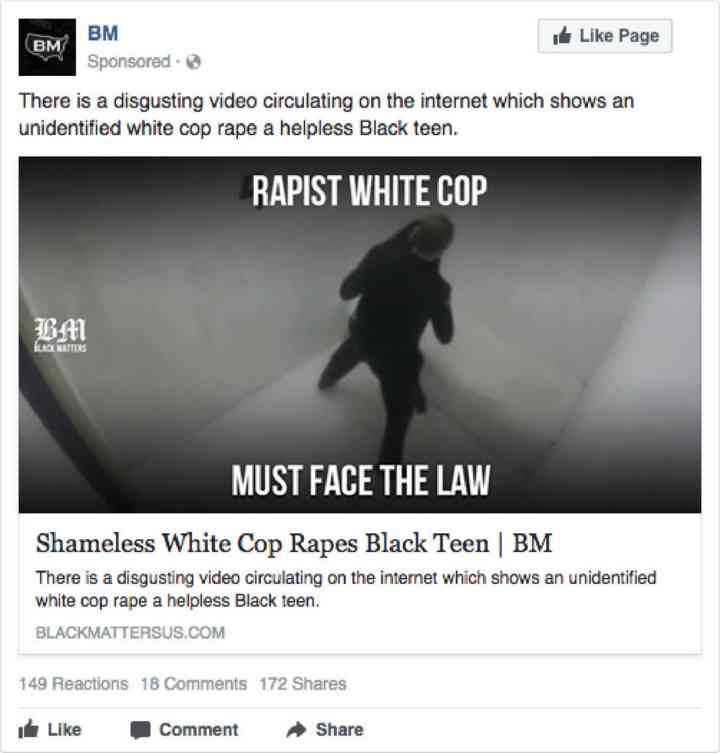 The page’s most notable activity was its creation of events in several cities and its coordination with real activists. As The New York Times reported in August, the administrators of the Black Elevation page were particularly savvy, messaging with activists and asking them to spread the word, posting videos to encourage people to show up at protests, and even advertising the job opening in the above post.

“I can’t believe it was a false page,” said Carla Cubit, an activist in New York who had shared the page’s Facebook events on her Twitter account. “It seemed legitimate.”